Three market dynamics that offer interesting opportunities in the Netherlands

Last December we wrote the following blog regarding our outlook on the market. Now, shortly after, unfortunately it looks like we were right. Take some time to read our three takeaways that are still in place and will offer interesting opportunities;

Three key market and regulatory dynamics are combining to form a perfect storm for distressed investing. Ready to be unleashed when the current period of economic boom comes to its unavoidable end.

Corporate debt levels are rising to an all-time high with a similar increase in likelihood that these debt positions cannot be serviced and become default. Under increasing regulatory scrutiny banks are looking for 3rd parties to take these non-performing loans off their balance sheets at a discount. The Dutch restructuring regulation WHOA offers the holder of these (senior) debt positions significant firepower to effectively restructure the company.

Debt is on a record run. Global debt levels are higher than ever before. In its November Debt Monitor the Institute of International Finance (IIF) reported that global debt hit a record high of over $250 trillion, estimating that the bulk of global debt comes at the account of companies and sovereigns. China and the US in particular leading the way. Record-low interest rates have made it extremely easy to borrow more money.

The International Monetary Fund (IMF) last month escalated its warnings about high levels of risky corporate debt. The IMF warned that almost 40%, or around $19 trillion, of the corporate debt in major economies such as the U.S., China, Japan, Germany, Britain, France, Italy and Spain was at risk of default in the event of another global economic downturn. Where the IMF defined debt 'at risk' when firm's earnings would no longer cover the cost of their interest expenses. 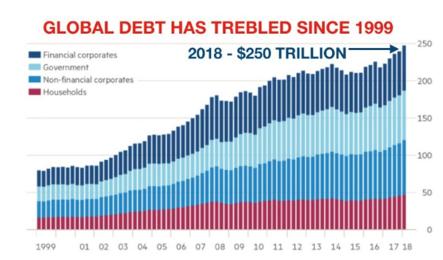 The IMF also warned that the outlook for firms has weakened despite the very low interest costs. Debt has risen and is increasingly used for financial risk-taking—to fund corporate payouts to investors, as well as mergers and acquisitions (M&A).

Exposures to small and medium-sized enterprises (SMEs), syndicated leveraged loans, direct credit, and high-yield corporate bonds are particularly at risk. And banks holding such positions on their balance sheets are susceptible to losses in the scenario of an economic downturn.

Following the 2008 economic crisis banks have been subject to stability enhancing regulations. Under this mandate the EU finalized the prudential backstop regulation for banks holding non-performing loans (NPL’s) in April 2019.

The new rules introduce a ‘prudential backstop’, a minimum loss coverage for the amount of money banks need to set aside to cover losses caused by future loans that turn non-performing. Under these rules a loan with become non-performing when no payment has been made for a period of 90 days. Banks will then need to set aside more capital on the assumption that the loan will not be paid back. The level of coverage required depends whether the loan has collateral against it and the time it has been non-performing.

Per the Basel III objective this will increase the banks resilience. It will also make it much more expensive for banks to hold bad debts or NPL’s on their balance sheets. Already are we seeing increasing activity in the market with banks exploring alternatives for these positions.

In 2020 the Netherlands finally catches up with international restructuring laws by implementing the WHOA (in Dutch “Wet Homologatie Onderhands Akkoord”). This new legislation legally enforces private restructuring plans for companies on the verge of insolvency.

Grounded in the effective economic position parties would have in case of bankruptcy it allows these parties to implement a restructuring plan that becomes binding on all parties involved, including those who oppose the plan.It is the Dutch equivalent of the UK Scheme of Arrangement and the US Chapter 11. The draft bill could become effective in Q2 2020.